Student B who took notes on her iPad

Student E – he always had a mask on so shoutout to him.

A professor who was very stylish.

Student G – She was super nice and always had something pink-colored on her body.

Student C – Who I only ever saw once

It comes in all different shapes and sizes, with lines that curve and swirl into intricate designs on smooth skin. No matter the tattoo’s color, price, or location, each symbol etched onto the body has a distinctive designated memory behind it. Here are some UT students sharing their sentiments behind their various unique tattoos. 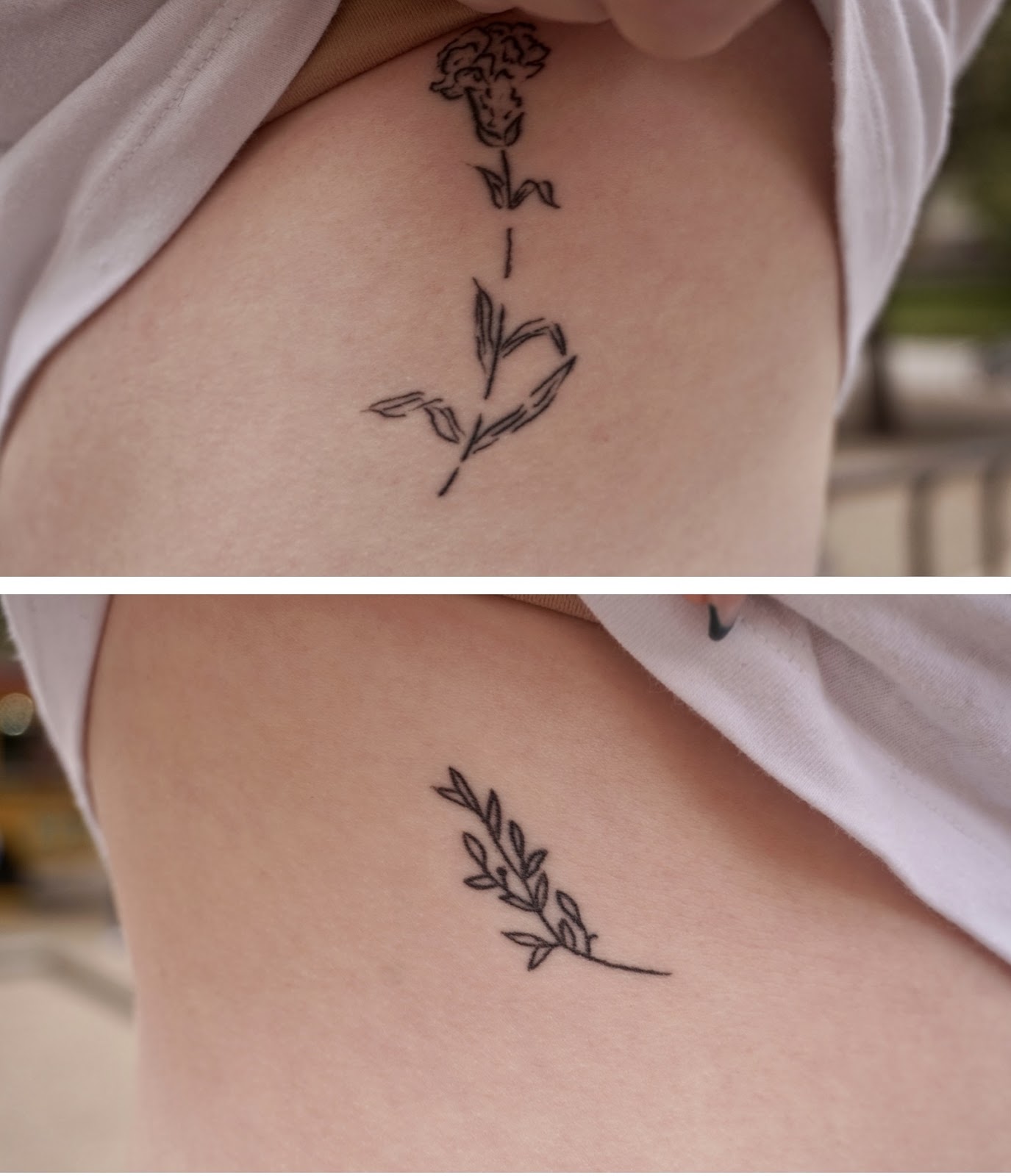 “The first one I got was when my best friend in high school came, and I wanted to do something really cool with her. I knew I wanted a certain place that was not very noticeable so I  got it on my side. It hurt like hell, but it’s worth it. It’s like a little artistic interpretation of a flower, like a green carnation. I’m a big Oscar Wilde fan, and I read somewhere that he was a little amateur botanist, so that was cool.”

“So this semester, I went before class started with my buddies, and I got one on the other side, and it’s a little olive branch. It’s cute, you know, Greek mythology. My friends told me to stop getting plant tattoos because I’m going to turn them into a garden. But I think that’s a great thing to turn into. So I’m not really mad about it.” 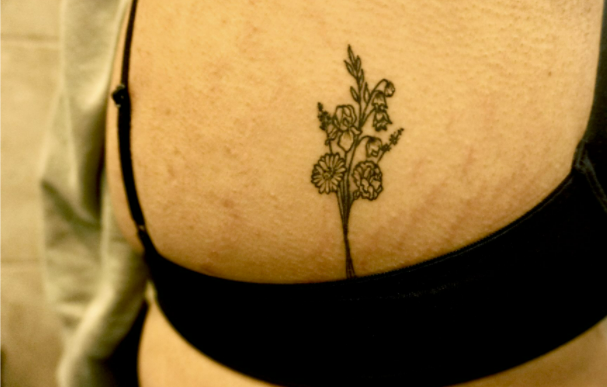 “I have one tattoo that I got at the beginning of the semester. I got it when my best friend came up from Baylor. Lillian and I went to a tattoo shop, and we got matching ones: on the back of her neck and mine on my ribs. The significance behind it is that it’s Lillian’s and another friend of ours and my mom’s favorite flowers altogether in a bouquet.” 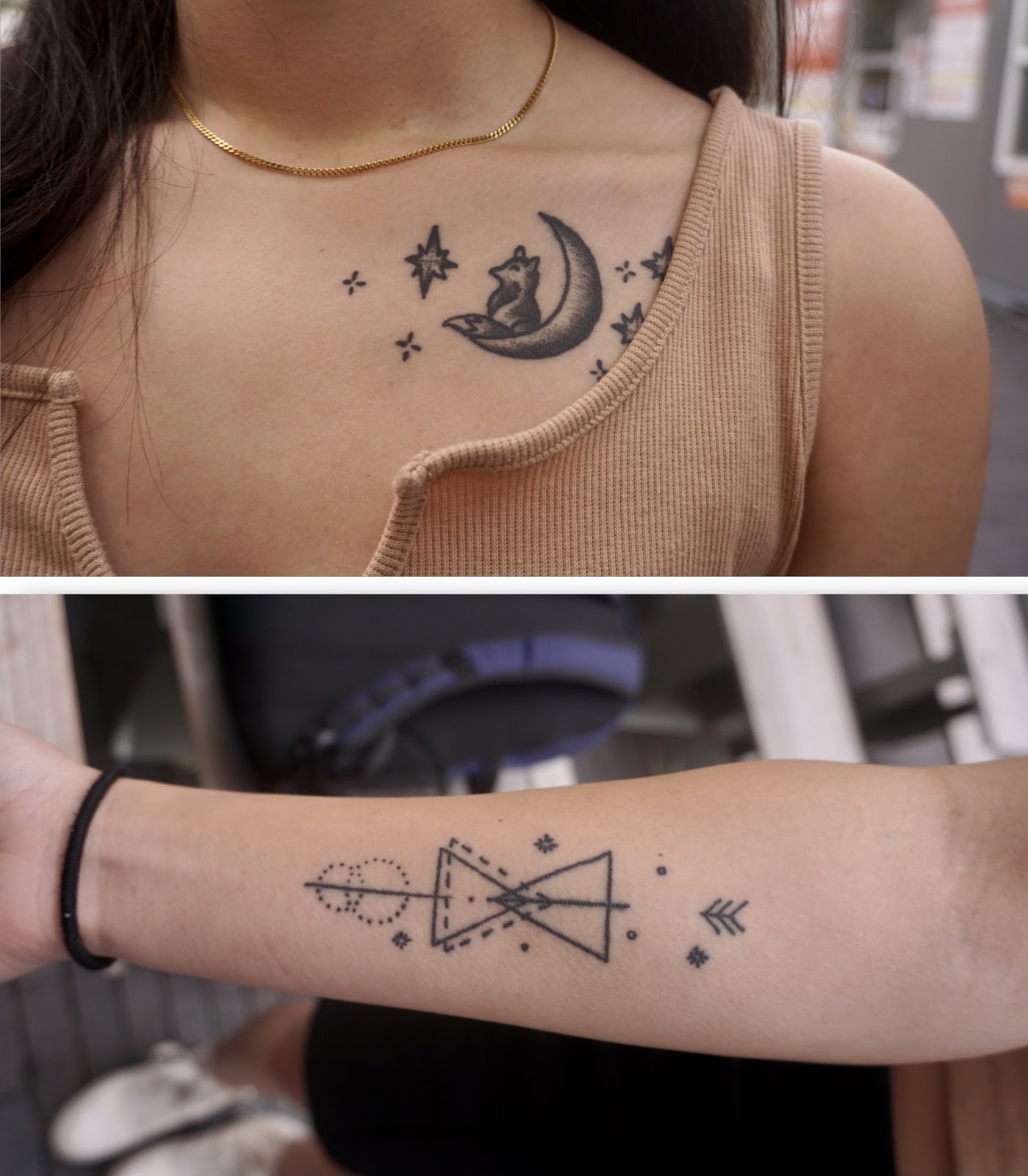 “I got my fox on a moon tattoo first in remembrance of my dad, who passed away over the summer of 2021, and it’s just a way for me to be reminded that he’s in a better place now. The second tattoo is an abstract representation of an hourglass with an arrow through it, meaning that my time on earth is relatively short, so I should make the most of it.” 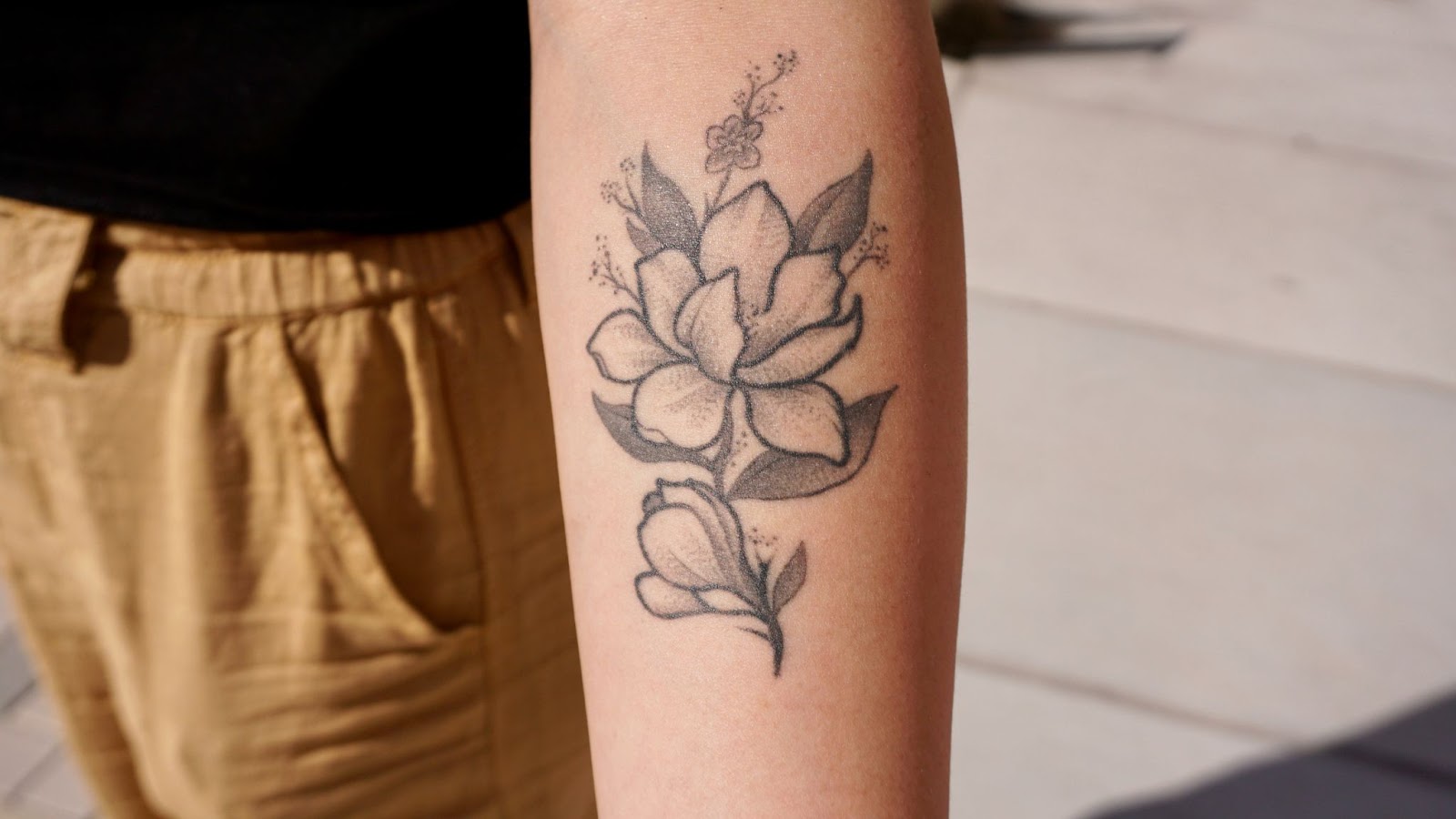 “I got it because it’s a gardenia flower, and they smell really good. My mom used to have bushes with gardenias in the front lawn, and she would pluck one and put it on the head of my bed when I couldn’t fall asleep.” 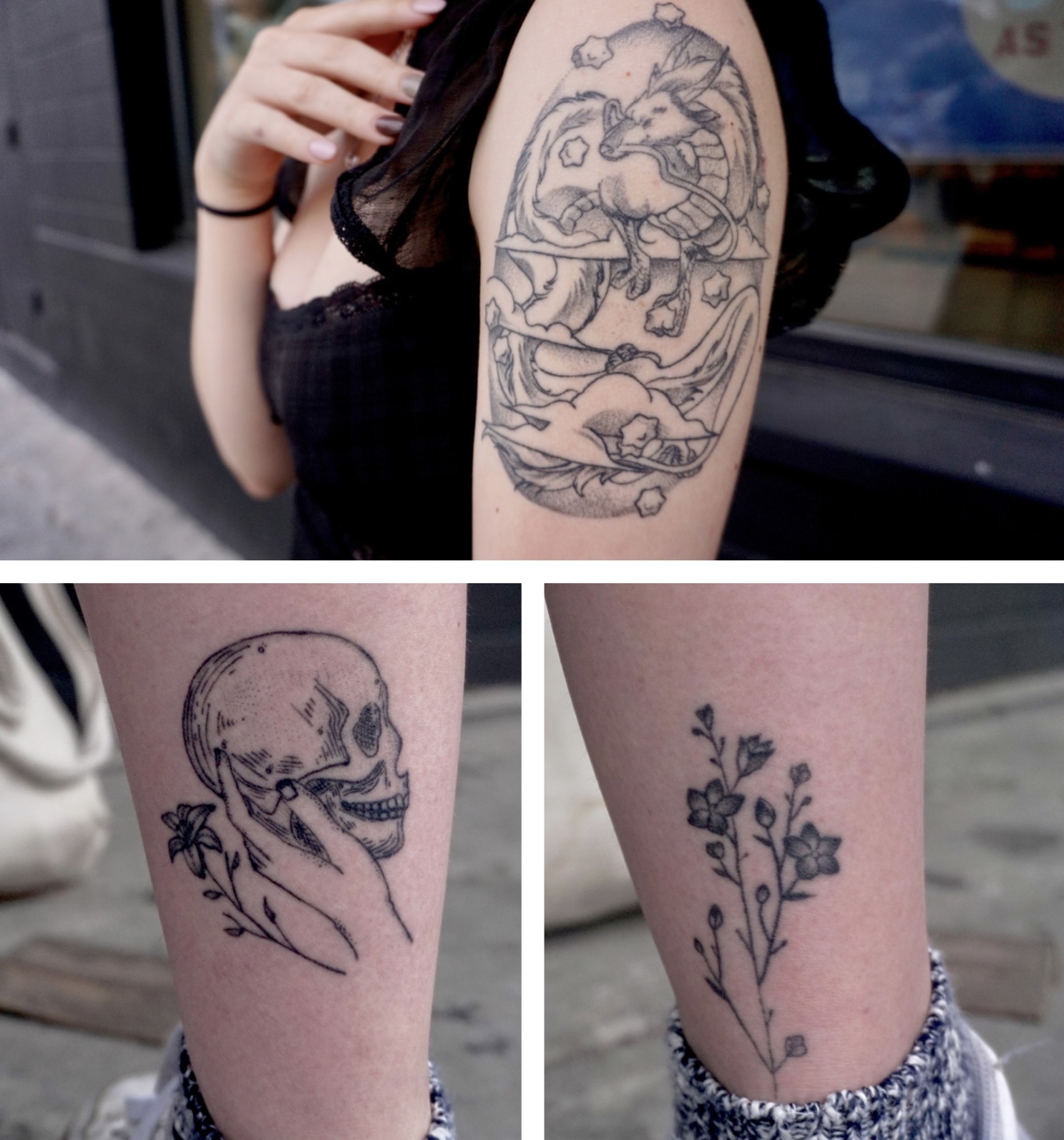 “Right now, I have nine tattoos; some of them are kind of stupid, like three little hearts that match two of my best friends and scissors that I got during a Halloween event. Some of them do have a deeper meaning, though. I have a tattoo of Haku, the dragon from the film Spirited Away since it was one of my favorite movies to watch as a kid. I have a hand holding a skull and a white lily to memorialize my dad, who passed away since he loved Shakespeare, and it’s similar to a scene from Hamlet.” 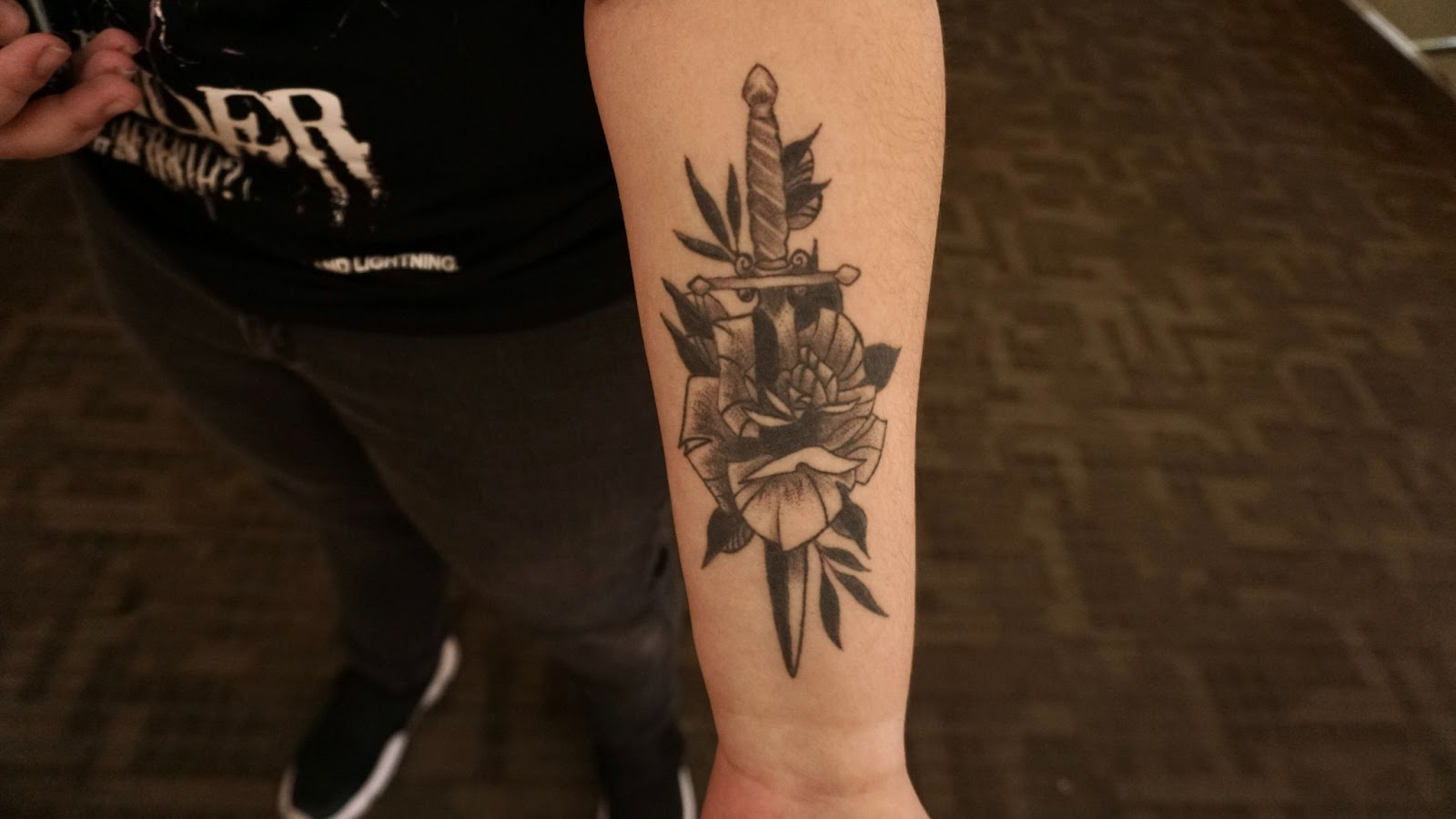 “This was my first tattoo, so I wanted to go big. The rose and dagger was a pretty cool design I found online, so I thought it looked pretty cool and wanted to get it on my arm. There was no meaning behind it, and I just thought it would look nice.” 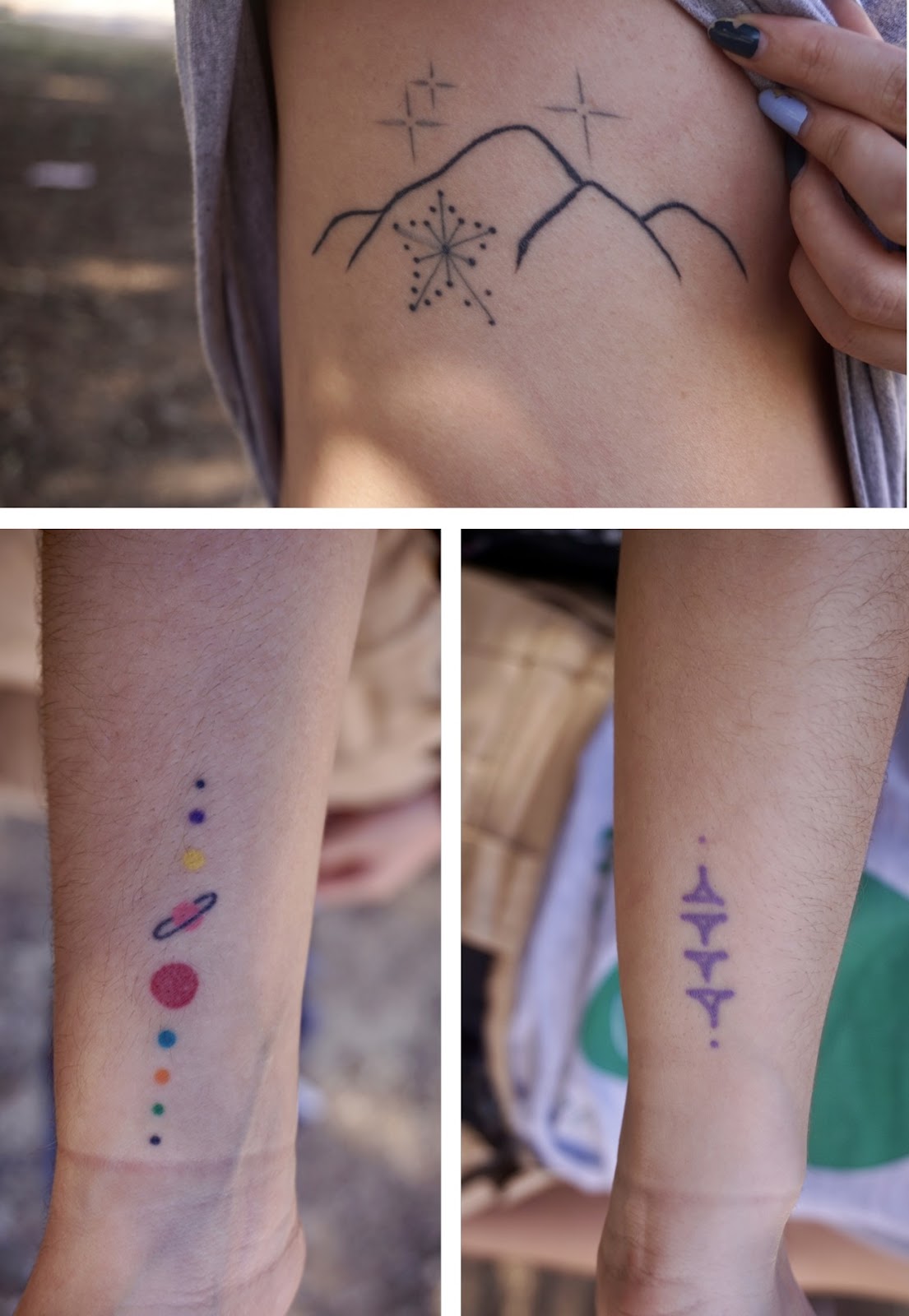 “A Friday the 13th design that has a 13 hidden in it: it was my first tattoo. I couldn’t really afford to get tattoos, but I knew it’d be cheaper on Friday the 13th, so I found a place that did cute designs and waited until then. I want to get three Friday the 13th tattoos over time since my favorite numbers are 13 and three.” 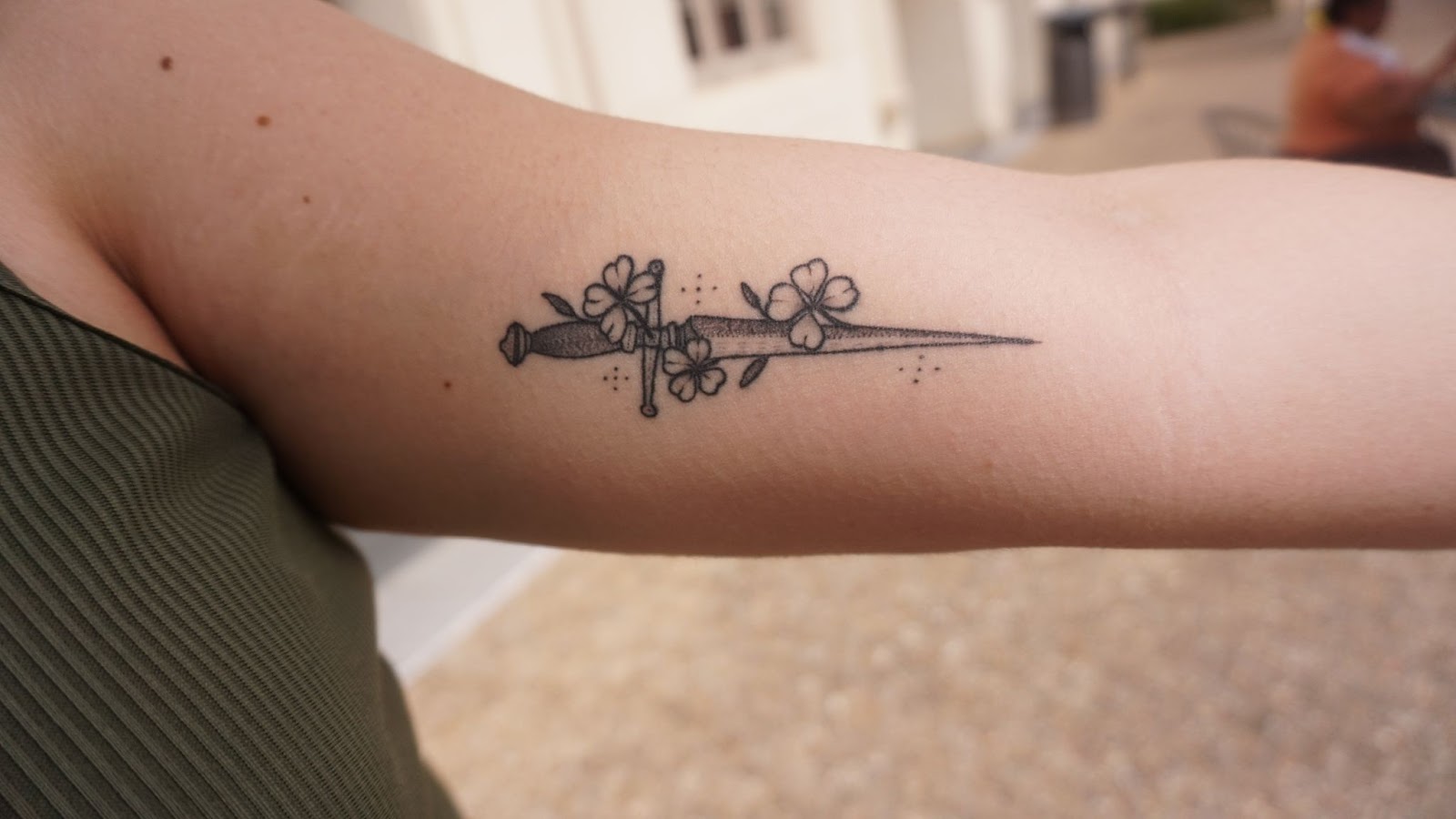 “I got my tattoo because I wanted to prove I could. The meaning behind it is that I have always been fascinated by knives and my comfort characters tend to be really skilled with daggers and knives, so it felt natural. It also became an inside joke between me and my brothers who always want me to ‘have a knife on me’.”

Whether getting a tattoo was a spontaneous decision or a well-thought-out  plan, everyone’s experience in getting one is special. Some hold deeper significance and implications, while others are simply random and meaningless. Tattoos are special in the way they allow anyone to express themselves artistically, and the UT campus is filled with students with a story to tell. With classes back in person, it’s likely that you pass by the many art installations here on campus. Many of us have seen these works, but never stop to learn their name or artists. This is your chance to appreciate the art you ignore every day.

Public art is something we often take for granted. The UT campus is littered with paintings, sculptures and digital pieces that we usually don’t give a second look. The art we ignore every day should be appreciated, so I hope that the small taste I was able to give here inspires you to look a little closer at the pieces you pass on your weekly commutes. It seems a fascination with the uncanny, skin-crawling sensations of the gothic narrative has led to this genre’s continuation and success throughout the centuries. First characterized by Horace Walpole’s novel, “Castle of Otranto,” published in 1764, the gothic genre is recognizable through the portrayal of medieval architecture or opulent modern architecture; ‘madness’ and the fear, confusion, or desperation mental illness can contribute to; sexual sin, often depicted through incest or sexual violence; supernatural aspects, including specters and monsters; and lastly, evil intentioned (usually) men of power and societal rank.

Often depicted in a Victorian-esque narrative, gender roles play a key part in the haunting storylines, with women usually portrayed as victims of a brutal, masculine threat to either their bodies or minds. This is not always the case, though, and as this genre evolved, the threats to sanity and personhood have been able to become less strictly gendered, but usually still containing components of dominance, submission and resistance within the relationships. usually colliding with the horror genre through these varying elements, the two are oftentimes conflated. Though these two work together nicely, the gothic is distinct in the sense of terror or great unease it creates, along with a confusion of good and evil–seen notably in Mary Shelly’s “Frankenstein’s Monster”. The complications of the gothic narrative that cannot be so easily simplified into categories of right, wrong, good or bad make this genre all the more intriguing.

In popular culture, the gothic can be seen within two of my favorite shows, “The Haunting of Hill House” and “The Haunting of Bly Manor”. These stories are both set in large secluded mansions and the question of what is real and what is not is often at play for the characters within the stories. “The Haunting of Bly Manor” draws from aspects of Henry James’ “The Turn of The Screw”, a gothic novella written in 1898; stepping further back into history, the well known novel of Charlotte Bronte’s, “Jane Eyre,” published in 1847, also shares aspects of the gothic narrative. The character of Bertha is depicted as a madwoman, a danger to society and also as an unknown phantom haunting Thorfeild. The fear and even disgust of mental illness that Rochester portrays is typical for this genre, due to the idea that there is something inherently sinister surrounding a lost mind. Jane, surrounded by mysterious sounds and an older, wealthy, yet secretive and moody ‘bachelor’ who desires her, finds herself very much within a gothic story. A novel published later, in 1966, by Jean Rhys, titled “Wide Sargasso Sea,” reimagines the character of Bertha in Jane Eyre. Antoinette–which we find out is Bertha’s true name–is the main character in this novel that revolves around shameful secrets; implications of mental illness; sexual sin related to lust; and the ‘other’ characterized not by supernatural occurrences but by cultural and racial differences seen as threats to ‘civilized’ (white) life. Prominent in this novel is also the power struggle between Rochester and Antoinette having to do with presumptions of gender roles based on masculine dominance and feminie passivity. All these shared elements are–I would dare say–common in everyday life; it seems aspects of the gothic genre through the form of secrets, sin, and power struggles pervade both fiction and reality.

This genre is so intertwined with our entertainment and culture, yet, can seem to be elusive or niche. Taking part in novels, films, and TV shows, the gothic can often be an undercurrent to more prominent genres of perhaps horror, fantasy, or historical fiction. Elusive or not, this adjective does seem to fit nicely with the mysterious genre it encompasses.